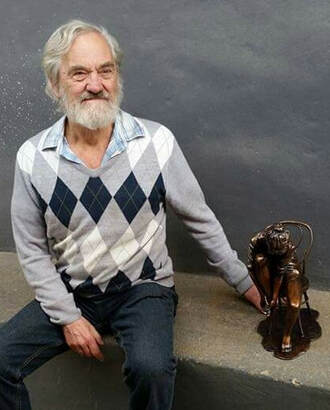 ​Patrick Reynolds is a self-taught South African sculptor who specialises in the human figure and wildlife. All his bronzes are limited editions, cast in the age old 'lost-wax' tradition.

Although he initially became well known for his beautiful wood sculptures, his bronzes have brought him the most success. His sculptures have been exhibited at the Everard Read Gallery in South Africa, as well as in Europe, the USA and in the UK. In 1998, his bronze sculpture 'The Curled up Nude' won an award in an exhibition at the Royal Birmingham Society of Artists' gallery.

"About 40 years ago, while travelling in Austria, I became aware of the woodcarvings produced by the local artists. Seeing a sculptor at work on a large figure inspired me to buy a set of woodcarving tools and try my hand at this art form. What began as a hobby subsequently became a profession as I turned to sculpting full time. After years as a woodcarver, I shifted to bronze, as certain galleries indicated that their clients preferred bronze, and also because at times there were problems obtaining suitable wood.

The technique of sculpting for the bronze pieces I create, now begins with petroleum wax. Michelangelo was of the opinion that modelling in wax or clay is a completely different art form to carving wood or stone, and this is quite true, since the one method involves reducing a block until the figure is revealed, whereas the other is a process of building up a figure, using small pieces of material.

The wax piece which will eventually become the bronze is begun by warming the wax until malleable, and forming that softened wax into a rough initial figure - in which I am mainly concerned with the gesture of the intended sculpture. When the wax has hardened, I then begin to slowly add more soft   wax to build up toward the correct proportions. Where the build up is too large, I cut it back with knife or wire loop tool. This goes on until the proportions, shape and  movement of the figure are satisfactory.

In terms of process, the work is often put aside; sometimes for months. Then when I come back to it, I see it with a fresh eye, and often see where it can be improved. Once I feel that the piece is finished, I make a resin mould around it. The same type of petroleum wax is then poured into that mould in order to make a hollow copy of the original wax sculpture. This hollow wax copy goes to the art foundry, where a heat-resistant mould is built up around it, which is then placed into a kiln for the wax to be burned out of it. After this, molten bronze is poured into the heat-resistant mould where the wax once was, to produce the bronze sculpture - which, after cooling, is ground, cleaned, polished and coloured (patinated) with acids. This is the 'lost-wax' casting technique."
​

Patrick draws inspiration from life around him. The human figures he has created have frequently emanated from a real life moment that caught his eye, which he quickly sketched and later brought to life in sculpture form. His own family have also inspired numerous pieces over the years, resulting in special memories becoming immortalised in beautiful bronze. The wildlife figures Patrick sculpts are predominantly based on favourite photographs taken on countless trips that he and his beloved wife, Heather, made to Game Reserves over many years.
​
The quality of Patrick's work reflects his passion for capturing the beauty around us. Patrick decides on a limit to the number of copies that will be cast of each piece, (known as the edition), and each bronze which is cast, is numbered.  When the edition is complete, the mould is destroyed, thereby giving the bronzes value as collector's pieces.